Join us to support the Great British Spring Clean

Keeping our borough clean and tidy is a priority for us, and once again we will be supporting Keep Britain Tidy’s Great British Spring Clean. This year’s event runs from 28 May to 13 June. 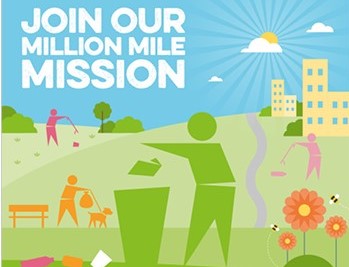 In the past 12 months, our outdoor spaces have mattered to us more than ever before, so the environmental charity is asking communities to show some love for those special places that have helped us through and help it to achieve a million miles of litter picking.

Cllr Lee Carter, Telford & Wrekin Council cabinet member for neighbourhood, commercial services and regeneration, said: “Great British Spring Clean is an opportunity for us to raise awareness of the record investment that we’re prioritising as a council into keeping our streets clean, whether that be through our contract with idverde or through our recent investment into local Community Action Teams.

“It’s also a great opportunity to raise the profile of the heroic efforts of our local Street Champions and community groups who make a massive difference in helping us achieve that too. It goes without saying that the money spent on clearing litter would be so much better spent on providing frontline support services for our residents, but ongoing investment is an absolute priority for the administration.”

Cabinet member responsible for co-operative communities, engagement and partnerships, added: “It isn’t just council crews who clear litter. There are our volunteer Street Champions and many other individuals and groups who care about keeping our borough tidy. We now have over 1,000 Street Champions who are making a difference to the environment on their doorstep.  Our environment has never mattered more.”

Now in its sixth year, the Great British Spring Clean is the country’s biggest mass-action environmental campaign. In 2019, 563,163 volunteers collected 997,377 bags of litter.

This year’s local campaign will not only see tonnes of litter being removed from the environment, it will also rescue thousands of the plastic bottles and aluminium cans that are littered and could be recycled.

Telford & Wrekin Council’s volunteer Street Champions and Climate Change Champions will be encouraged to separate the litter they pick into two bags - one for plastic bottles and cans for recycling and another for rubbish.

In addition to community litter picks during the Great British Spring Clean, the Council is organising a number of collective litter picks in various locations on 12 June. Street Champions, parish and town Community Action Team and others will come together in small groups on the day with a shared mission to pick up litter.

Councillor Carolyn Healy, Telford & Wrekin Council cabinet member visitor economy, historic and natural environment, and climate change, said: “Every day, millions of things that could be reused or recycled end up being thrown away or littered, including a mountain of single use plastic bottles.

"As well as blighting our environment, litter pollution does unimaginable harm to our wildlife. Our mission is to create a better borough and be carbon neutral by 2030. Sometimes the scale of the challenge can seem overwhelming, but we can all do something positive that makes a difference and shows we care.

“We can choose to reuse and recycle. We can also choose to get involved in events like the Great British Spring Clean. Small, individual steps equal big collective strides. Together, we can make a big difference.”

Individuals, groups and organisations can register their pledge to litter pick during the Great British Spring Clean at www.keepbritaintidy.org/gbspringclean.

Keep Britain Tidy chief executive Allison Ogden-Newton said: “Whether you commit to do five minutes or five hours, every single pledge will help us reach our million-mile target and clear many tonnes of litter pollution from our environment.”

If you are getting involved and want to share your story to encourage others to pledge, tag in @TelfordWrekin on Facebook and Twitter and use the hashtags #GBSpringClean #LitterHeroes

Watch this video to find out more

Individuals, groups and organisations can still all pledge to take part. Whether you commit to do five minutes or five hours, every pledge helps clear litter pollution from our environment. 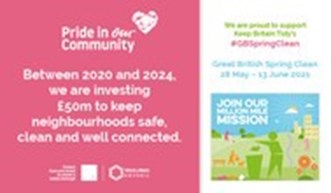